When narrator WX17240 Ted Faulkes, 2/32nd Inf Bn, finally landed on Italian soil at Brindisi, he was a typical example of the unexpected POW role thrust on an AIF serviceman deprived of his function and life as a fighting soldier, separated from his means of fighting - his arms and tactical discipline - and without any effective and accustomed leadership.

Deprived of all his taken-for-granted personal liberties, particularly those of his personal hygiene; Unable to obtain the simplest of medical assistance; Given incomprehensible orders in a language he couldn't understand; Degraded as a human being, starved, beaten, herded around with his companions like a mob of sheep, without news from home and loved ones, he has little real knowledge of what was happening in a war which for him was "over" but which for him had resulted in an indefinite prison sentence.

One of the beliefs of the newly taken POW is that in the ebb and flow of battle, he could be rescued by his comrades-in-arms. As this hope slowly fades, as he is moved further and further back to the rear, he is forced to fall back on his own physical and mental resources. For some individuals, a new mental attitude fails to emerge and they succumb to a mental illness, just as real as physical wound.

When he finally reached his permanent camp of detention at PG 57 Gruppignano, where nearly all Australian and New Zealand other ranks had been concentrated, Ted Faulkes too, had to make a monumental change of attitude to different standards of hygiene, diet, discipline and organisation.  But at least he was among his peers, and within the camp, responsive to the discipline of his own Australian NCOs as he basically he had been in battle. To some extent his individual temperament and personality had already been moulded by the structure and esprit de corps of his AIF unit - the 2/32nd Infantry Battalion.

In the same battle at El Alamein on July 17, 1942, QX1472 Doug Baker (see "Emergency Certificate" below) and QX2285 Tom Burnett from that Battalion were also taken prisoner. 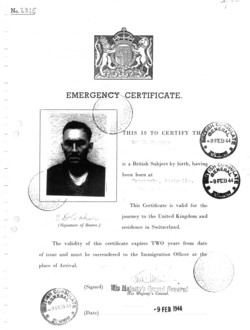 It took nearly 10 months for their captors to ship them across the Mediterranean from Tripoli to Palermo in early 1943, on a ship packed with coloured South Africans who, like them, had been used by both Germans and Italians as wharf labourers, in contravention to the Geneva Conventions.

Only a few days later, the 8th Army entered Tripoli.

From Palermo, the "whites" were taken to the transit camp at Capua, the site of which is now part of the Naples International Airport, and from there were sent to PG 57 at Gruppignano.

All three,Ted, Tom and Doug, ultimately escaped to Switzerland. Since being taken POW, Doug Baker has suffered from a pounding in the head he ascribed to the heavy bombardment that had preceded the action at El Alamein which resulted in his capture, and suffered from headaches and stress since that time.

On his arrival in Switzerland, he was admitted to the Polish Military Hospital in Weisendungen, near Winterthur. The entire staff at this hospital had crossed into Switzerland as part of the division lead by Generall Dalle from France, complete with arms and all equipment. It had been interned, but was later repatriated by agreement with the Germans and Vichy France.

The hospital unit however, had remained as one of the very few foreign units to operate militarily in Switzerland, in accord with the provisions of the Hague Conventions. The staff at this hospital could not determine the cause of Doug's problems and after ten days he was discharged from it and sent to Heiden, a "camp" near the German border, much appreciated by those British "evades" directed there.

On his eventual return to Australia in 1944, after 60 days leave, he was admitted to the 12th Army General Hospital in Brisbane, which later was to become the Greenslopes Repatriation Hospital. During a stay of 10 weeks, he was diagnosed as "anxiety state - six months of trying circumstances".

After a long dispute with the Department of Veteran's affairs, in 1988 he was recognised to have been one of the battlefield's casualties who had suffered "Post-Traumatic Stress Disorder" (PTSD) and was awarded the appropriate TPI pension.

The daily life of an Australian or New Zealand POW at PG 57 Gruppignano is well covered in Alex Barnett's book "Hitler's Digger Slaves" (H8). He describes the inhumane treatment of POW there, who were denied hospitalisation and the deliberate retention of those Australian medical personnel, who were entitled to repatriation under the Geneva Convention (p.90).

John Barrett's book "We Were There" also discusses case histories of the effect imprisonment on the long term health of many POW (M52 p234-237).