Campo PG 57 was a specially built camp for Allied POW established in the far north province of Friuli, some 80 km north-east of Trieste near the provincial capital Udine. Udine itself is only a little over 100 km from Lubjlana, the capital of the Yugoslavian state of Slovenia.

The site chosen was on a river plain of the Natisone, south-west of the town of Cividale and the nearest railway line. This site allowed room for expansion of the camp facilities and its main feature was the ruined old Chapel of San Martino, sometimes known as San Mauro or Grupignano. The old chapel was torn down and construction work on the prison facilities started in 1940.

The nearest hamlet was Premariacco, site of an old Roman settlement, which gave one of  the many names for the location of the prison buildings.
Most POW arrived there by train at the railway station at Cividale de Friuli, the much larger town to the north of Premariacco. 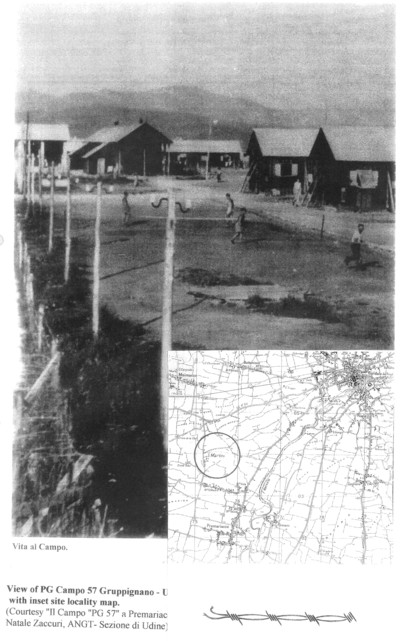 To most of the inmates it came to be known as PG Campo 57 "Gruppignano" - Udine. It can easily be located on a map of Italy by finding the most northen tip of the Adriatic Sea, separating Italy from Yugoslavia, locating Trieste, and moving north.

The numbering of Italian prison camps commenced in early 1942, and by that time, the prison buildings consisted of 2 self contained compounds, each with its own cook-house, ablution block, recreation huts and Orderly Rooms. The dormitory huts were made of double wooden walls located on concrete foundations, with a melthoid roof, and one single heating stove, for which there never appeared to be any fuel.

Sleeping accommodation was in wooden double decker bunks in groups of 8. Each hut held approximately 50 prisoners, and the Hut Commander slept in an area which doubled as a "Hut Office". Each compound contained some 20 huts, so that there would be approximately 1,000 POW in each compound.

From the Camp looking north through the perimeter barbed wire system, there was a spectacular view of the Dolomites and the mountains of nearby Yugoslavia. The secenery was magnificent, even when viewed through barbed wire spectacles.

The Camp was controlled by Lt Col V.E. Calcaterra, formerly of the elite Carabinieri Police, Calcaterra, who prided himself on his strict discipline, and who boasted that his prison was "escape-proof", was justifiably "Enemy Number One" to every ANZAC POW in the camp. He was succinctly summed up by  A.V.W "Bluey" Rymer, a British wireless operator/air gunner, as "a short-arsed, fat-gutted little shit. If you were sitting on one side of the camp and you did not get up and stand to attention, it was into the boob, bread and water" (M4 p47). 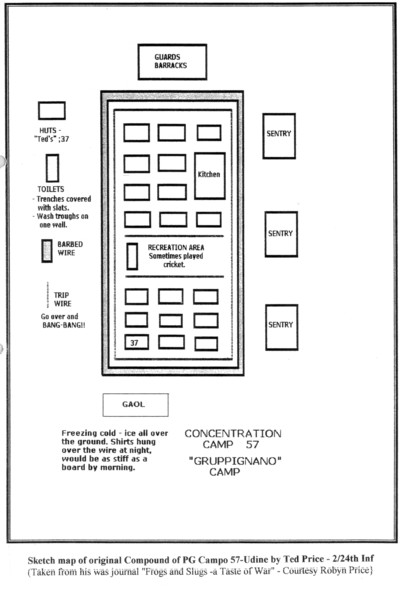 As part of the numbering and re-organisation system, the camp was gradually emptied of Yugoslav, Cypriot and Greek prisoners and became the main Italian prison for Australian and New Zealand "other ranks". Australian officers were concentrated in PG  Campo 78, Sulmona, and New Zealand officers at   PG Campo 52, Chiavari.

By June 1942, PG 57 held some 2,000 Australian and New Zealand POW. As the fierce fighting around El Alamein saw many Allied POW taken by Rommel's forces, but handed over to the Italians, the Italian authorities pushed forward their expansion plans, and two new compounds, 3 and 4, arose to extend the already operative compounds 1 and 2. By the end of 1942, the four compounds were home to some 4,000 ANZAC POW, a figure not much less than the total number of AIF POW in all German camps.

Early in 1943, following the drafting of Italian other ranks held in Australian POW camps as agricultural labourers on manpower depleted Australian farms, many of the private POWs in Gruppignano, as well as some corporals, were likewise drafted out to work on farms controlled by Campo 106 Vercelli and Campo 107 Torviscaso. Some New Zealanders were included in the drafts for Vercelli, but very few Australians were sent with those New Zealanders drafted out to Torviscaso.

Both work camp complexes were situated in the north of Italy, Vercelli, west of Turin and near the French border and Torviscaso on the other side of Italy, near the Austrian and Yugoslavian ones. When the Italian Armistice was signed, their remote locations were to prove most advantageous to escape attempts by their inmates.

MI9, the branch of British Intelligence concerned with the recovery of POW, was operative from its Middle Eastern base in Algiers, working in tandem with the SOE and OSS in Italy to recover Allied POW from both sides of its coast, as well as from its mountains. So unlike the famous escape of the 19 men from Gruppignano, which shattered Lt Col Calcaterra's "escape-proof" boast and lifted morale in Campo 57 to unbelievably high levels, the geography of the work camps and the aid give by local farmers backing up the activities of the various Allied Missions, was an immense support
to those POW liberated at the Italian Armistice.

The chief functional difference  between MI9 and SOE, was that the former was mainly interested in the intelligence that recovered POW could give, whereas the main function of the SOE and OSS was to sabotage the Axis war efforts, particularly their supply lines to their fronts, while simultaneously organising and training local patriots in underground armies, which could not only assist in the liberation of their own countries, but could take and hands-on approach to the administration which would have to restore them when hostilities ceased.

The PG Campo 57 escape by tunnel of 19 of its ANZAC POW, all of whom were eventually and unfortunately re-captured, is now considered in greater detail.

An Australian sapper from the 2/13th Field Coy, Sgt Noel Ross was one of the casualties of the heavy fighting withdrawal from Derna back into Tobruk, and also was one of the AIF POW among the early arrivals into Compound 1 at Gruppignano.

A designer and builder of outback bridges, he had noticed that unlike the heavily compacted deep soil of the sewerage pits dug deep in the ground at his compound, the earth in the excavations in the new compound was much more friable.

For some time he had been thinking about an escape tunnel, and the hut under construction in Compound 3, nearest the perimeter wire, seemed to him to be an eminently suitable spot to start one. He began to plan a vertical shaft driven down under the floorboards for about 12 feet into the friable soil formation, from which a lateral drive could directed at the perimeter, gradually reaching the surface in a patch of maize planted outside the wire by a local farmer. The maize patch would give cover to those eventually escaping through the tunnel to the exit point, giving them a good chance of an undetected get away in the open.

Hut number 5 in the new Compound 3, was thus chosen to be the one from which digging would commence. It was within 30 metres of the perimeter wire on the north east corner of the compound, well away from the administrative buildings outside the wire and the tunnel could be planned to rise slowly towards the surface within the maize patch.

Construction was commenced immediately. Hut 5 was complete and some POW had been moved into it to alleviate the over-crowding in Compound 2.
Digging operations were well under way when batches of new POW from the Alamein battles began to arrive after being shipped across the Mediterranean.

Most of these new arrivals were assigned to Compound 3 and the new Compound 4 was already being prepared to receive more. Secrecy was paramount to the success of the planned escape route. WOII Arch Noble of the 2/24th Inf Bn, the Hut Commander and leader of the tunnelling party, placed the hut out of bounds to all other POW on the pretext that a thief had been active in the hut and they were trying to identify and deal with him. Nevertheless, the newly arrived POW had to be made aware of the escape plans and were sworn to secrecy. Two of them actually became members of the escape party.

Full details of the enormous difficulties faced and overcome by the tunnellers and the steps taken to maintain secrecy have been extensively documented by both official war historians and some of the participants themselves. This Recorder will content himself by listing the details of the 19 POW escapers.

List of 19 escapers by tunnel October 30, 1942 (in alphabetical order by name, rank, service number and unit (NZ participants in italics).

Acknowledgements and Thanks to:

"The land on which this cemetary stands is the gift of the Italian people for the perpetual resting place of the sailors, soldiers and airmen who are honoured here."