As the winter sports season in Adelboden drew to its conclusion, notices appeared inviting "evades" with special qualifications or skills to attend courses at various Universities, trade schools and other educational facilities. One practical snag was that even British officers on their allowance of 25 Swiss Francs per day would find private lodging almost beyond their pockets, while the average non-commissioned soldier, whose pay was only 5 Swiss Francs daily, was virtually excluded from taking up these offers, which required living in cities, rather than small villages or large ski resorts. 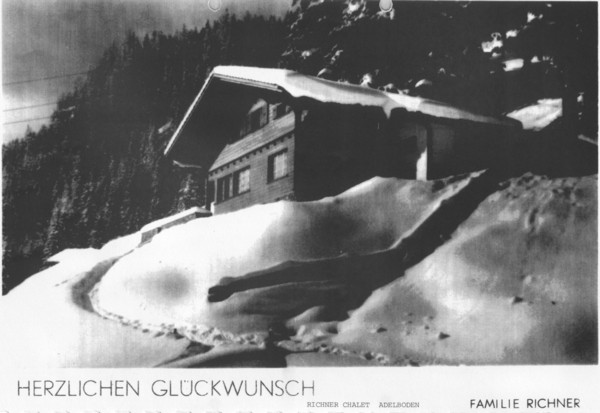 Whilst chatting about this with Ing. Oskar Richner, the father of the Recorder's Swiss skiing friend met on the slopes, Rolf Richner, he said: "Well, I don't think that's much of a problem. You're a graduate in geology from the University of Melbourne. The Polytechnic in Zurich is well known for its Geology School where Professor Niggli (a world authority on tectonics) teaches, is not far from Wildegg. If you'd like to study there, I think I can fix it". 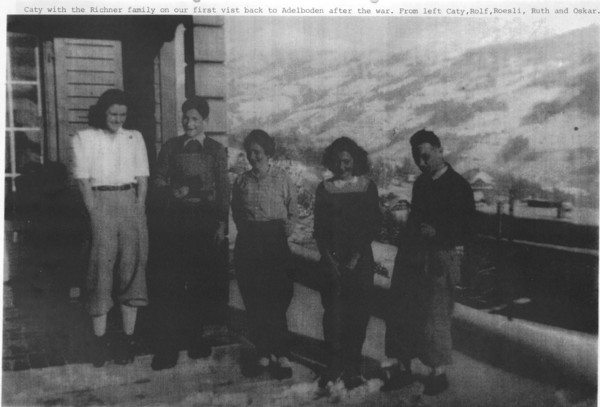 Oskar Richner, a corporal in the Swiss Army but Managing Director of one of the bigger cement works in Wildegg on the main railway line from Olten to Zurich, was as good as his word. And when their holidays were over, Oskar, with his wife Roesli and two teen-aged children, Ruth and Rolf, closed up their Adelboden chalet and took me back to Wildegg with them as a "foster son".

They were a fantastic family.

Each day I would catch the "bummel-zug", the local train, to Zurich, cope as best I could with Niggli's lectures which were given in French and return to the family home adjacent to the cement works in the afternoon. With a cheap student pass, I could virtually travel around Switzerland provided I checked back in to the local police at Wildegg, who were empowered to give me a pass if I wanted the stay outside Wildegg overnight.

Again from friends made in Turbental and Adelboden, I made other friends in Zurich and Bern, particularly a young couple, Paul and Trudi Schenk in Bern. Paul worked for Radio Beromunster, the national channel in Bern, and was a walking history book on his home town, which among other things is famed for its arcades and fountains. We would spend hours walking through the town, with him explaining the significance of particular fountains, houses and public places. He, and the Richner family, did their best to teach me "Schwiezer-Deutsch" and I finally did master the national card-came "Jass" a type of bridge, but I think, in the end, they found it easier to practice their English on me, than to try and interpret my attempt on their own language.

However, my idyllic Swiss holiday was to be interrupted by secondment to the British Consulate in Geneva, where I remained  for the remainder of the war, leaving for London in February 1945, for discharge from the AIF. I was to return to Europe with UNRAA, to work with refugees and displaced persons returning from the camps and forced labour workplaces to their own countries and home towns. Initially based in Normandy, I ended up in Haaren in Southern Holland dealing mostly with Dutch and Belgian refugees returning from Germany. 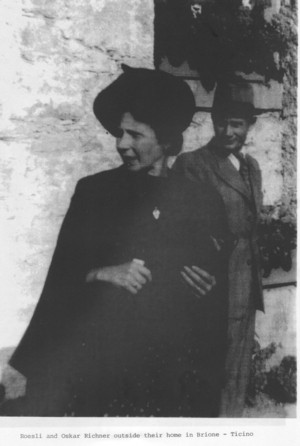 I had married in Geneva to my Dutch wife Caty Oosthoek and had started to learn her mother tongue which was useful in helping to process these refugees. It also gave me the opportunity to meet her Father and other relatives. We have re-visited our friends in Switzerland and her relatives in Holland many times since the war. When Oskar Richner died some time ago, Roesli Richner came out to stay with us here in Melbourne for a while. She only passed away in 1999, at the aged of 99.

Paul Schenk is now deceased but Trudi Schenk is still living in Bern, having sold their lovely home and moved into a retirement sanitorium. We still correspond.

Caty's Father and Mother had divorced before the war. He had re-married and Caty's half brother and sister have often visited us in Australia. Her only full brother was caught by the Gestapo while serving with the Dutch underground, and died in Dachau Concentration Camp.

I was never to know one of my Dutch brother-in-laws.