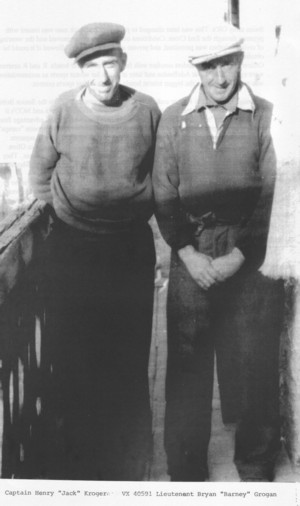 Captain Jack Kroger was among the many Australians captured during the withdrawal into Tobruk in 1941. He had been a schoolmaster at Wesley College in Melbourne before enlisting into the AIF and among his students was Fred Eggleston, who had enlisted into the RAAF after completing a Master of Science degree in physics at Melbourne University in 1937, and then worked briefly in Germany before the outbreak of war.

They remained firm friends throughout their lives, sharing Italian POW experience in the officers' camp at Sulmona. As with nearly all other Australian officers reaching Switzerland, both escaped from the "Moosburg Express". In the same box-car, Jack and Barney Grogan had drawn the first two numbers to escape, while Fred, having drawn number 10 escaped later, before the train entered the Dommodossala tunnel and thus found themselves free, and still in Italy (Geoff Chinchen had drawn number 12 but was taken through the tunnel and escaped later from German territory).

After processing by the Swiss and the British Military Attache in Bern, Jack was notified that as senior Australian officer in Switzerland, he would be responsible for all Australian "evades". Julius "Did" Fenwick of the 2/24th Infantry Battalion was made his paymaster, being promoted Local Warrant Officer II rank.

The Australian officers under his command were:

Mini-biographies of these officers are included in their respective units in Volume II. The 3 RAAF officers among the above 14 were later to be joined by 13 other RAAF officers, either members of or attached to RAF squadrons, 3 of whom were "internees". (See story - Lancaster "R for Robert" in Book Three - "Alpine Airmen".)

The Swiss AIF "Half Battalion"

When VX1580 Captain Henry Jack Kroger of 9th Division Headquarters was notified that, as the senior ranking AIF "evade'" in Switzerland, he would be responsible for all AIF "evades" and would operate from the Allied Swiss Escapee Headquarters in Wald under British command, he established his administration in the Swiss town of Wil, Kanton, St. Gallen which was the HQ of all British troops in Switzerland.

All 12 of the AIF Australian officers and the 3 from the RAAF in Switzerland, formerly Italian POW, had escaped there from one train (see story of the "Moosburg Express" ).

Those AIF OR's who had been sent out to work camps mainly under control of Campo 106 Vercelli were luckier than their colleagues who had remained in their main camp PG 57 at Gruppignano. Their work camps were small and isolated, guarded in the main by southern Italian conscripts or older soldiers and near the Swiss border. Those drafted out to working camps in retaliation for the Australian Government sending out Italian POW mainly to gather in the fruit crop of the Australian summer of 1943, had been ordinary soldiers, certainly under the rank of sergeant, so it thus also became Italian policy not to draft out senior Australian NCOs although some did volunteer to work as they correctly assumed escape would be relatively easier from such camps.

Nevertheless, apart from his junior officers and the odd senior NCO, arrivals in Switzerland included few substantive sergeants. When this scarcity became an impediment to maintaining internal discipline within Australian camps, many Australian ORs suddenly found themselves promoted to senior NCOs.

Some ORs such as "Butch" Jocumsen and John Peck were commisioned as Captains in the British army on special missions, directly responsible to the War Office in London.

Escaping Australian POW entered Switzerland by many different routes, but after preliminary interrogation and medical examination by the Swiss, were handed over for futher processing at Wil which in previous years had been a processing centre for Polish and French soldiers entering Switzerland. From Wil, the early arrivals were sent to neighbouring villages to be billetted in school houses, disused factories and other public facilities. These "camps" were under administrative control of a Swiss officer who as "camp" Commandant, acted in liaison with the local town authorities and the Swiss command in Wil, which was in control of "Secteur Sitter" that area in the German-speaking part of Switzerland which had been designated for the British "evades". "Evades" of other nationalities were accommodated in other Secteurs in the French and Italian speaking areas of their host country, which at least minimised linguistic difficulties.

On arrival at Wil Australian "evades" were once again medically examined, dentally inspected, fitted out in British battledress and interrogated by British intelligence officers who covered every aspect from the time of  capture to crossing the Swiss border. On arrival to their designated "Camp", "evades" were provided with razor blades, toothbrushes, soap and other toilet neccessities on the normal British army scale and at the normal intervals. "Evades" were allowed to draw the agreed payment in Swiss francs for their pay-books in accordance with their rank. Initially, ORs slept on straw as did the Swiss army ORs.

This was later changed to palliasses, and each man was issued with pyjamas through the Red Cross. Conditions continually were improved and the wearing of civilian clothes was permitted, and private accommodation was allowed if it could be obtained and paid for. Officers could live in modest comfort with full board at smaller hotels. R and R centres were opened initially at Adelboden and later at Arosa for winter sports as accommodation was made available in the bigger tourist hotels in those winter sports centres.

Although Captain Jack Kroger endeavoured to obtain permission from the Senior British Officer to have all-Australian "camps" controlled by Australian officers and NCOs, it was felt that the "mixing of Dominion and Home personnel was of great advantage from the spirit of Empire feeling" and AIF ORs remained in their various composite "camps".

Air Force personnel, mainly commissioned officers or senior NCOs were in separate "camps" either for officers only as in Adelboden, or for all airforce ranks as in Glion. "Evades" were actively encouraged to find jobs or follow special trade courses. They could obtain leave passes to visit friends either in other "camps" or civilians, who were  most hospitable and almost invariably well disposed towards the Allies.

Saluting of officers, particularly not their own, was a minor source of friction at the beginning, but soon failed to be  problem as more and more "evades" elected to wear civilian clothes and obtain civilian jobs, or their own officers elected to wear "civvies".

Liquor, freely available after many years without it, was the main source of  trouble, together with failure to observe curfew or to move around without permission, but the general behaviour of AIF personnel was good, and the rules of self discipline worked to the satisfaction of Swiss Commandant and Australian "evade" officer and OR alike.

Leave for 10 days every three months was granted to all ranks, with a free rail warrant and subsistence allowance for the period. This subsistence was SFr7 per day for ORs while officers continued to draw the normal SFr15 per day. A postal allowance of SFr6 per month was debited to paybooks to cover costs of airmail letters home, for although POW mail was free of postal charges, "evades" were free men under Swiss law and strictly speaking not entitled to gratis POW mail. However, letters posted back to Australia without stamps, still managed to be delivered by the Swiss postal system!

By and large the joint Swiss/British administration of the Australian "evades", their welfare, health, entertainment and contact with their folk back home lasted one full year from the date of arrival into Switzerland to the date of their repatriation.

Despite their experience as POW, the representatives of 36 different AIF units and their RAAF colleagues carried on their tradition of individuality within a military framework and with no more "glitches" of discipline than would have occurred in any "half battalion" of their fellow soldiers still serving with their units in the field.

Firm friendships were forged among all ranks and many Swiss civilians in what was to both an unexpected, but culturally interesting, encounter.