Chapter 9 - Christmas in the Snow 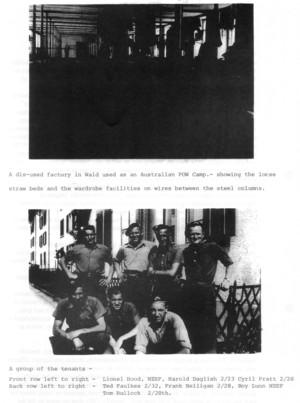 "So we spent winter there. Every morning I had to go outside and grade once or twice a day. But we'd stay inside for most of it. Play cards or amuse ourselves. Once a week we'd go to the pictures. Catch the train down to the pictures about 10 to 20 miles away. That went on until June. There was all speculation "when's the razing going to happen"?  Now we had wireless and we listened to the BBC every night - see how many bombers went over Germany tonight and how many never came back. So anyway there's a bloke walking past and he says "Put the wireless on" and someone says "the Major might be on". That was the general idea. So anyway the girl broadcasting says British and American paratroopers landed in France last night through the night, but there's no sea-borne landing yet. So we switched over to the BBC and the sea-borne landing had come too. I had a terrible fear they'd get belted back. Anyway that went on for a few days and they got their foothold in France, and then after a while some of the bombers would go right over Switzerland. They weren't supposed to but I guess they were taking a short cut or something. Anyway just after I volunteered to work on a farm, so they sent me out to work on a farm right on the Rhine river just half a mile across from the farm were German farmers.

"I was brought into this farm and for three weeks I was there, and gee, talk about work. They'd call me about an hour before daylight each morning. I'd go down to the stables, yoke up the horses, clean out the stables put them into the wagon the other men would be there too. And we'd go down to the paddocks and cut all the grass for the cows. They cut all the grass there and leave the rows in the barns. The first morning they tried to teach me how to use a scythe. I couldn't cut myself with a scythe. I'd seen my father use one a bit, it takes a bit of practice. "Like so," he says, "easy".

"After about half an hour of seeing me scythe the grass and hit the ground, he gave up. I was doing a bad job. So he gave me a pitchfork. Then I had to fork the grass onto the wagon. I could do that quite easy. That was the first job of the day. Then about seven o'clock we'd go back to the house for breakfast. You could eat half a sheep by then. Then we'd go back onto the fields doing hay planting silver beet or corn or whatever was going and back for dinner. We had about two hours for dinner and then back down the paddock again. No idle time, busy all the time. They sure know how to work over there. This was the middle of harvest. Sometimes it was nine o'clock at night before you got finished and you'd get up at four or five o'clock in the morning. You didn't need much rocking to go to sleep.

"I used to like sitting outside on the balcony and watch the bombers going over Germany. Sometimes you could see the flares and fires of the cities that were getting bombed across the horizon. I was working out on the grape vines one day and this big American bomber came along, not flying very high. He was lost you see, because once they lose their formation they don't have much of a chance of getting back to England. Fighter planes will shoot them down. And this plane was flying along the border and I thought to myself "you'll have a fighter on to you in a minute". He crossed over a hill and a couple of minutes later he came roaring back, there were three fighter planes onto him. Lucky for him they were Swiss fighters. They were escorting him to the Swiss aerodrome. Then the crew would be interned and the war would be over for them.

"That goes on all the night-time and one day I'm listening to the BBC news on the wireless - they usually bung that out in the barn. They had seven or eight men on the farm, none of them speak English. I am the only foreigner.
"So anyway harvest was just about finished and the British and American armies were coming through France and they'd just reached the Swiss border near Geneva. We were ready for that because when they reached the Swiss border we might be allowed to go home.

"I got a notice one day to report back to camp so I packed up the next morning and farewelled people and went back to camp. The blokes were all in pretty high spirits there all reckoned we were going soon. I was there for another week or two and had a reasonably good time. We were called on parade one day at dinner time, all the Australians. There was a British officer in charge of us and he said "You'll have an early meal tonight and then go on to the train". He put all the hotels out of bounds so you couldn't get a drink and get drunk. So we had an early tea and then marched down the street to where the railway station was and all these Swiss people followed us. Some were glad to see us go, but most were sorry.

"We got on to the train and into Zurich and took us to a big hall where they made us wait for a while to pick up other fellows coming from different directions. We all got on the one train then and spent all night going across to Geneva. It was daylight just as we got into Geneva. After a little while waiting there we walked across the platform and got onto a French train and headed off into France. After about half an hour we started to see where the war had been. There were knocked out tanks and crashed aeroplanes and blown up towns. And the further we went the more war there had been. But the French people were happy. They'd just gotten rid of the Germans!

(Edgar "Ted" Kent of the 2/3rd Anti-Tank Regiment, reached Switzerland on October 28, 1943 and left on September 23, 1944, like most AIF POW "evades", have spent almost a year in that neutral country. He arrived with Cpl Gordon Putland, of the 2/28th Inf Bn and Ron "Bones" Jones of the 2/13th Inf Bn. Their full stories appear in Volume II under their units. An article on their experience was published in the Latrobe Valley Express of Tuesday 15 August, 1995.)